Composition writing for lower primary can be challenging to teach. Most primary school students start learning how to write English compositions by the second semester of Primary 1. At this age, students are mostly taught how to write compositions based on 4-sequential pictures.

As the story sequence is guided by the pictures provided, Primary 1 and 2 students usually do not have to come up with their own story plot. Both the setting and the characters of the story are provided in the pictures too.

So, what do Primary 1 and 2 students need to learn in order to write a good composition at this level?

1. Know the basic sequence of a narrative

At Primary 1 and 2, teachers generally still look for a basic chronological progression in students’ writing. That is why the more advanced introductions, such as a flashback or beginning with the climax, are not taught in lower primary.

Instead, students are taught this basic sequence in their compositions:

The main character usually faces a problem, which is shown in the second of the four pictures.

The problem is solved, either by the character or someone else. This is usually shown in the third picture.

This is the ending of the composition, where students wrap up or conclude the story.

If your child is in Primary 1 or 2, get him or her to understand the above sequence and apply it when writing their compositions. Of course, in cases when the pictures provided do not have a problem or solution, students should write their compositions based on the given pictures and not in this suggested sequence.

Watch this video for an introduction to Composition Writing for Lower Primary:

2. Know how to write interesting introductions

Students in lower primary like to begin their compositions with phrases such as ‘One fine day’, ‘Last Monday’ or sentences such as ‘It was a sunny day.’

There is nothing wrong with that. In fact, if your child is in Primary 1 and is just starting to write compositions, he or she can begin their stories with these simple phrases.

If your child wants to describe the weather in the introduction, try to go beyond just writing ‘one fine day’ or ‘one sunny day’.

Ask your child, “How was the day ‘fine’? Describe what you mean by fine.”

For example, instead of writing ‘One fine day’, your child could write ‘Cool air caressed my cheeks as I stepped out of the house.’

Or, instead of writing ‘One sunny day’, your child could write ‘The sun shone brilliantly in the clear blue sky’.

Besides describing the weather, there are other ways lower primary students can begin their introductions:

BEGIN WITH A SOUND

Sometimes, beginning a story with a sound helps to grab the readers’ attention.

Here are some examples:

Boom! A clap of thunder jolted Tyler out of his sleep. He opened his eyes, shocked. Within seconds, a few drops of rain started pelting against the window of his bedroom.

Screech! Ben heard the familiar sound of his school bus pulling up next to the road.

You can let your child learn some words that imitate sounds. These words are called onomatopoeia.

Here are some commonly used ones:

For an onomatopoeia to be effective to begin a composition, it must be relevant and meaningful. Do not begin with a sound simply because you do not know what else to write.

An effective method is to get your child to not only learn the sound word on its own, but also to come up with a suitable sentence following that word (as shown in the two examples above).

BEGIN WITH AN ACTION

Lower primary students can learn how to begin their introduction with a description of the character’s action too. To do this, ask your child this question, “What was the character doing at the beginning of the story?”

Instead of writing the usual,

One sunny morning, Bella woke up from her sleep.

This is how your child can begin with an action,

Bella opened her eyes and glanced at the window. Sunlight was filtering through the gap between the curtains.

We use verbs when describing a character’s actions. In the above example, the verbs ‘opened’ and ‘glanced’ show us Bella’s actions.

Let your child learn some vivid verbs, so that he or she can use them to begin their introduction with a description of the main character’s actions.

3. Know how to describe characters’ emotions

Lower primary students’ story characters tend to be flat and one-dimensional. For your child’s story to stand out, he or she should learn to describe the feelings of the characters.

When describing feelings, go beyond using common words such as ‘happy’, ‘sad’ or ‘angry’.

Students should learn to show their readers (in this case, their teachers) how happy, sad or angry their story characters are.

For example, instead of writing,

Jonathan was happy when he reached the beach.

Get your child to write,

Jonathan’s eyes lit up. A wide smile flashed across his face as he dashed towards the beach.

Get the FREE list of 120 phrases to describe characters’ emotions.

Having a knowledge of writing techniques is of not much use if your child has a weak foundation in sentence structure.

Primary 1 and 2 students should start writing by learning to write simple and short sentences.

Just as how a child learn to walk before learning to run, lower primary students should learn to write simple sentences before progressing to write complex ones.

Some examples of conjunctions that your child can use are:

and
when
while
although
as

Show your child a picture. Get him or her to write 5 to 10 simple sentences based on the picture.

Bella opened her eyes. She glanced at the window. Sunlight was filtering in. She looked at her alarm clock. It was nine o’clock. She jumped out of bed. She ran out of her bedroom.

Bella opened her eyes. She glanced at the window where sunlight was filtering in. Bella looked at her alarm clock. It was nine o’clock! She jumped out of bed and ran out of her bedroom.

Compared to the first example above of writing 7 short sentences, can you feel the rhythm in the second example with a combination of short and long sentences?

In general, write a longer sentence after two to three short sentences. This provides a smooth rhythm for your essay.

Hope the above 4 tips are helpful for your child who is in Primary 1 and 2 to start learning how to write better compositions.

Want your child to improve his English composition writing without the hassle of travelling to attend classes? 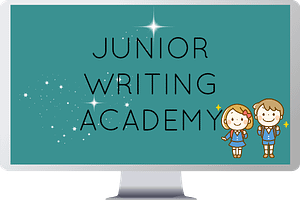