This model composition, A Fortunate Escape, is written by one of our Writing Academy students.

“Truth or dare, Ben?” Max questioned. Max, Ben and I were walking home together while I nibbled at the beef burger I had grabbed from a shop nearby.  ‘Truth or Dare’ was a game we usually played to amuse ourselves on the lengthy, boring journey home. Ben wanted a dare. “Well, Ben, I dare you to carry my bag all the way home!” Tom commanded as we laughed at poor Ben’s plight.

As Ben strenuously pulled the heavy bag up his shoulder and adjusted the bag straps, he noticed that Max’s bag was partially unzipped. When he hastily flipped it around, an object flew out of the bag, and over the fence of our neighbour’s house.

“Oh, no,” Max muttered, “I think that was my English assignment.” On closer inspection, Max’s distinct handwriting was visible as we bent down to peer under the fence. Stretching his hand out and trying to crawl under the fence to retrieve the paper, Ben found that it was just out of reach.

“Well, I guess I’ll just have to climb over the fence to get it,” Ben groaned. He was barely able to climb up, using the small gaps in the wooden fence as handholds as the fence was nearly as tall as him (which was not very tall), and low enough for something to be flung over it.

Sliding down the fence, Ben grabbed the valued piece of paper, complaining about injured dignity. Just then, a loud and menacing bark cut his words short.

Our neighbour, Mr Mason, owned a German Shepherd, renowned for its ferocity, which guarded the house. It was something we had overlooked, too focused on retrieving Max’s assignment. Ben’s legs wobbled like jelly and his face turned a deathly white as the German Shepherd advanced slowly on him like a wolf stalking its prey.

Max and I stared at it, transfixed in fear. Ben backed up against the fence, attempting to climb up, but a loud howl stopped him in his tracks. Jolted out of my trance, I frantically searched my mind for a silver of an idea about how I could assist Ben. Beads of perspiration trickled down my forehead. Should I climb up the fence and help Ben? Or could I do something to distract the dog? I remembered that I had a toy In my bag that I had bought at the school fair. Dropping everything, I rummaged through my bag as Ben huddled into a ball in the wake of the dog bouncing and leaping toward him.

My search came up short. What were we to do? Ben was in danger of being attacked by Mr Mason’s ferocious dog. Searching the pavement for rock or pebbles, my gaze landed upon a brown object. My half-eaten burger that I had dropped in panic. Dogs love beef! There was no time to waste.

Grabbing it from the pavement and gripping it tightly, I used all my strength to throw it over the fence, hitting the German Shepherd squarely on the neck. “Eat it, dog!” I yelled.

Thankfully, the dog decided that the burger, brimming with scrumptious, fresh beef, was more appealing than the puny human who cowered at every advance. Leaping onto the burger, the dog turned its head away from the paralysed Ben, who swiftly regained his composure and scrambled over the fence.

The three of us made our way home again, agreeing that it was a fortunate escape. Without the help of Ben’s saviour, my beef burger, he could very well have been severely injured. I jokingly added that Ben would have to reimburse me for my lost beef burger, while Max sheepishly apologised to Ben for the dare which had led to the entire ordeal. Eventually, we parted ways, knowing that the incident would be something we could joke about for a long time to come.

We hope you enjoyed reading this model composition, A Fortunate Escape. 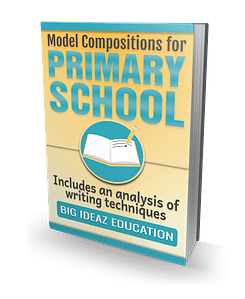